Numbers 2: The Arrangement of Tribal Camps

Although the Israelites don’t know it yet, they’re going to spend the foreseeable future wandering around the desert, because God is not going to bring them to the Promised Land for 40 years. (We’ll read why later on.) So they’re going to be breaking camp, moving on, and setting camp back up. But they are not just to set up their tents in any old way—in this chapter, God gives them instructions, as to what families/tribes are to set up in what locations. The Tabernacle will be in the centre of the camp, and the Israelite tribes will surround it, in a prescribed pattern.

I won’t bother going through the whole chapter, for this blog entry, saying “this tribe will set up on the South, and that tribe will be beside them…” Instead, I’ll just put up a diagram of how the camp was to be set up. 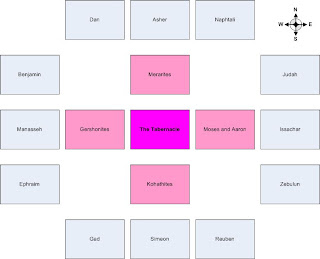 The Tabernacle is in the middle, obviously, and the Merarites, Gershonites, and Kohathites are parts of the Levite tribe, which is why they’re to be directly surrounding the Tabernacle.

As is probably going to be the case for much of the book of Numbers, I don’t have much to say about this chapter.
at 2:23 pm