I was about to start blogging about Numbers 32—which I will do next—but I figured that I really needed to find a good map, first, to illustrate what was happening. So, as I tend to do, I went to Google, to look for some.

The first search result I came across was to a site called BibleMap.org. Although it’s not useful for my current purpose, it’s very cool: It has a search box, where you put in the Bible verse you want to look up—ESV or KJV—and then it searches in the text you’ve chosen for any names of places; cities, countries, whatever. It then superimposes those places onto a satellite map of that area, using Google Maps! See the screenshot for an example: 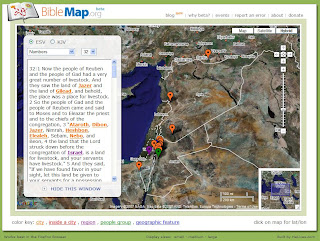 Now, I don’t really know how useful this will be; as you’ve noticed, in the view below, since it’s using Google Maps, it’s using the names of modern-day countries and cities (with the Old Testament references superimposed on top). However, if you were reading, for example, Numbers 21, and wanted to see where the lands it’s talking about are, in relation to today’s world, you could easily do that.
at 3:40 pm 0 comments

Numbers 31: Revenge Against the Midianites

“Satan has asked to sift y’all…”

The new ESV Bible that I got on the weekend is already helping me, in that it made a particular passage a bit more clear. It’s Luke 22:31–32, which reads like this in the NIV:

31“Simon, Simon, Satan has asked to sift you as wheat. 32But I have prayed for you, Simon, that your faith may not fail. And when you have turned back, strengthen your brothers.”

There is also a footnote for verse 31, that indicates that the first “you” is plural, in the Greek. There is no plural word for “you” in English—unless you count “y’all”—so that’s why the verse reads “you” in English. (I do actually use the word “y’all,” sometimes, even though it’s not a term that we tend to use here in Ontario.)

31“Simon, Simon, behold, Satan demanded to have you, that he might sift you like wheat, 31but I have prayed for you that your faith may not fail. And when you have turned again, strengthen your brothers.”

For the most part, the wording for both of these is similar. However, there is a footnote in the ESV version for verse 31 that I found more clear than the NIV’s footnote:

The Greek word for you (twice in this verse) is plural; in verse 32, all four instances are singular

(This is why I included the verse numbers in the quotes, above, which I don’t normally bother to do.)

In other words, if I were to paraphrase, Jesus is saying this:

Simon, Satan has asked to sift all of you, as wheat, but I’ve prayed for you, Simon, that your [Simon’s] faith may not fail. And when you, Simon, have turned again, strengthen your brothers.

For me, this gives a whole new understanding to this verse. When Jesus was crucified, he knew that the disciples were going to be struck a heavy blow, but he was specifically commissioning Simon (who we usually call Peter) to strengthen them. He knew that Peter was going to deny him, but still, he was the one tasked with strengthening the other apostles.
at 11:26 am 0 comments

I decided, this past weekend, to go looking for a new Bible. My Bible, since I was 17 or so, has always been a New Student Bible, which I [mostly] like, but I felt it was time for a new one. Mostly because I’ve already read all of the notes in the Student Bible, so they aren’t as helpful anymore—I no longer need to read them, because I know what they say.

The translation used by the Student Bible is the New International Version (NIV), which I like. I find it very readable, and, from what I’ve heard, it’s also a very accurate translation. But I’d been hearing about the English Standard Version (ESV); I forget where I heard about it first, but I know that my pastor switched to that version, for his own use, and I’d also heard about it on the Withering Fig blog. (I first came across the Withering Fig blog because of an article he wrote on 5 Keys to Picking the Best Bible Translation for You, which I liked.)

Just to clarify, I asked my pastor about it again on Friday, as to his reasons for switching to the ESV. To sum up the conversation, this is what I remember:

So I decided to give the ESV a try. From what I can tell, there aren’t yet any “study Bibles” that use the ESV translation, so I just went ahead and got a regular Bible.

As a side note, I was shocked how expensive Bibles are! I got mine for $7.50, which is a “bare bones” soft-cover Bible, with no bells and whistles, but the average price of the Bibles I saw was $40–50. I also saw some that were $80–90, which is just absolutely ridiculous. Aside from price, it also blows me away, when looking through Christian bookstores, to see all of the gimmicks on display from “Christian” publishers. Anything from commonplace gimmicks, like a leather-bound Bible with an imprint of a crown of thorns on it—Christians will buy almost anything that has a crown of thorns or cross logo on it—to over the top gimmicks like the “Duct Table Bible,” which, literally, has duct tape over the cover, to just plain morally terrible gimmicks, like Bibles that are made to look like teen magazines, full of pictures of “pretty” white Christians, embodying all of the same stereotypes of beauty that Christians aren’t supposed to care about. (Let your beauty come from within? No? Anybody?)

Anyway, ranting aside, I’m going to continue quoting from the NIV translation on this blog, for the time being. But if I really start to like the ESV translation, I may switch, and start quoting from that, instead. I even toyed with the idea of starting to put all of my quotes in two versions, side by side; perhaps NIV or ESB, and then NASB. However, in many cases, that might be overkill; in some instances, the NASB might make the author’s intent more clear, but in other cases, it won’t add anything. I suppose what I should do is include the side by side quotes when it will help, and just use a readable version in other cases. We’ll see.
at 9:34 pm 2 comments

The “Immutability” of God

I saw a good post on the Withering Fig blog, on 1 John 2:17. You can read the post here.
He’s talking about the “immutability” of God—which means that God never changes. (Hebrews 13:8 says that “Jesus Christ is the same yesterday and today and forever.”)
at 12:45 pm 0 comments