You could view the books of Leviticus, Numbers, and Deuteronomy as books which are geared toward preparing the Israelites for becoming a new nation. Leviticus was concerned with laws, and, as the name implies, many people associate Numbers with numbers—censuses, and other lists. Appropriately enough, it opens, in this chapter, with a census of the Israelite people.

The LORD spoke to Moses in the Tent of Meeting in the Desert of Sinai on the first day of the second month of the second year after the Israelites came out of Egypt. He said: “Take a census of the whole Israelite community by their clans and families, listing every man by name, one by one. You and Aaron are to number by their divisions all the men in Israel twenty years old or more who are able to serve in the army. One man from each tribe, each the head of his family, is to help you.”

The chapter then goes on, in verses 5–16, to list the heads of the families who are to assist Moses and Aaron in taking the census.

So, they do. Moses and Aaron, along with the heads of the families, take a census of the Israelite community. Verses 20–43 list all of the people, broken down by tribe. The format is the same for each tribe:

From the descendants of X:
All the men twenty years old or more who were able to serve in the army were listed by name, according to the records of their clans and families. The number from the tribe of X was Y.

The results were as follows; from the descendants of:

I believe this partially had to do with the purpose of the census; God had said in verse 3 “You and Aaron are to number by their divisions all the men in Israel twenty years old or more who are able to serve in the army” (emphasis added). The Levites, as the LORD’s chosen priests, were not to serve in the army, so there was no need to include them in the census.

Many—most?—Christians skim through the book of Numbers, because it’s very hard to get practical spiritual lessons out of a list of Israelite men who were eligible to serve in the army. I’m going to have that same problem, as I try to blog through the book.

If one wanted, one could probably use these numbers of army-eligible men to extrapolate the probable population of the nation of Israel, at the time, but for me, that number would be meaningless without knowing the relative populations of the surrounding nations. So the Israelite army was 600,000; how big were the armies of other nations? Did this make Israel a small nation, or a medium-sized one, or a large one? (We actually know that they were a small nation, because God told them so, in another passage. I believe that other passage was in Deuteronomy, and went something like “I did not choose you because you were the biggest of nations, rather because you were the smallest,” but I spent a few minutes searching for it, and couldn’t find it. Yet one more reason why I wouldn’t be allowed to be a pastor; pastors have to know things like that…)

I even put together a graph, showing the relative sizes of each of the clans, but they all turned out to be pretty close to each other, so it didn’t tell me much either. 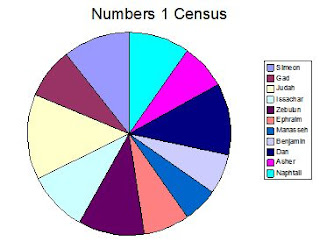 The verse: "The LORD did not set his affection on you and choose you because you were more numerous than other peoples, for you were the fewest of all peoples." is found in Deuteronomy 7:7. The only reason I know that though is because I am reading through the Old Testament and just finished Deut. and I remember reading it recently. Yay for search engines!