Back to the Old!

It’s time for this blog to get back into the Old Testament! Why? Well let’s take a quick trip through memory lane…

I can’t remember if I ever mentioned this, but the genesis of this blog (pardon the pun) was a series of posts I was reading online from Slate, back in 2006, in which a David Plotz—“a proud Jew, but never a terribly observant one”—decided to blog his way through the Bible and give his thoughts on it as an outsider. (I’m not clear as to whether he just planned to go through the Jewish Scriptures or into the Christian New Testament as well.) As to be expected, his thoughts were… not always positive. 🙂 At times he felt it was archaic, barbaric, etc. I’m not throwing stones; it’s exactly what I’d expect someone without a lot of context to think, coming to Genesis cold1, and according to his introduction (linked above), he was wasn’t claiming to be an expert or to bring an authoritative voice.

I’d have loved to have seen him continue on and make it all the way through the Bible—it would have been a fascinating read2—but I also decided that I should give an “insider’s perspective,” and start my own blog, so in June of 2006 I started this one, beginning with Genesis 1.

However, if you’re not familiar with the Bible, let me tell you that it is long. There’s a lot of stuff in there! Even for a Christian, for whom reading the Bible is a core part of what I should be doing in my daily life, I’ve struggled to keep going! If you were to look back at my stats on how consistent (or inconsistent) I’ve been, it would look like… well, it would look like this: 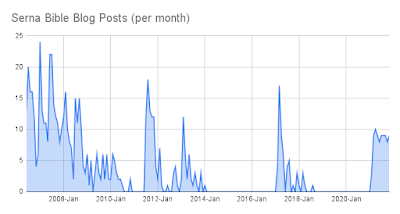 Lots of spikes where I was blogging a lot, and lots of other spots—sometimes years long—where I wasn’t blogging at all. In my defense, I wasn’t really trying to adhere to a schedule, I was just blogging whenever I felt like it; I might toss off a number of posts in a day, or I might not touch it for a week.

In 2009, a few years in, I felt I was getting a bit bogged down in the Old Testament, so I decided to switch things up a bit and start alternating between the Old and New Testaments. I borrowed a reading plan from my old New Student Bible that took this approach: for however many days you’d work through Genesis, then for however many days you’d go through Matthew 1–9, then a number of days to get through Exodus, then Matthew 10–20, etc.

Of course, by the time I decided to take this approach I’d already gotten all the way up to the end of 1 Samuel, which meant I’d have a bunch of catching up to do in the New Testament before I’d get back to the Old Testament again.

The New Testament—and the Pandemic

So I started working my way through the New Testament. As the graph above indicates, however, there was a huge empty period starting in 2018 in which I didn’t publish anything.

Then in 2020, the pandemic hit and I had a lot more free time—which I squandered, continuing my streak of publishing nothing.

In 2021 I realized how much time I’d been wasting staring into space and decided that I’d better get back into this blog and use that time more effectively! So I started blogging again. I also created a set schedule whereby I’d post twice a week, Mondays and Thursdays. Adhering to a schedule forced me to be more consistent, which is why the graph above starts to stabilize near the end. (So far so good!3)

Back to the Old Testament!

All this to say that I’m finally getting to the part of the reading plan in which I switch back to the Old Testament, and start alternating between the Old and the New.

I’ll also be switching back to the New International Version (NIV) version of the Bible for a while. For whatever reason, back when I decided to start alternating between Old and New Testaments, I decided to use the English Standard Version (ESV) for the New Testament and the NIV for the Old. Is that necessary? A valid approach? Useful? Dunno. But it’s what I decided, and I see no reason not to do it, so… it’s what I’ll be doing. Unless and until I change my mind—which is always possible.